#903 From Tiffany’s necklace to Somerset 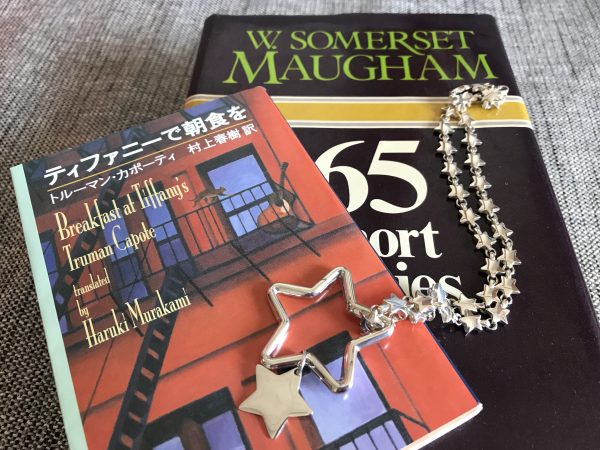 I bought a used silver necklace from my friend and it is TIFFANY’s! Actually she gave me a great discount. The chain has many stars and the pendant is 2 big stars. The stars on the necklace remind me of the TIFFANY store in N.Y. where I’ve only visited once. I don’t know why it reminds me of that.

A novel “Breakfast at Tiffany’s”

The week after I got the necklace, I went to a book store and bought a book called “Breakfast at Tiffany’s”. The book was translated by Haruki Murakami.
In the book, the protagonist Holly living in N.Y., played by Audrey Hepburn in the movie of the same name, says, “How old is Somerset ?”.
I didn’t know who Somerset is, so I went to look for his profile. It turned out Somerset’s full name is Willian Somerset Maugham, and he is an English novelist. Although I’ve never read his book, his name attracted my attention.

A few days later, I got some books from my uncle. One of them was Willam Somerset Maugham’s book “65 Short Stories”. It is an English book and is very thick at about 8cm. I’m not sure that I would be able to finish it.

Things happen for a reason

Tiffany’s star silver necklace, a novel “Breakfast at Tiffany’s”, and Somerset Maugham are three separate items. But in my case, these 3 items connect strongly together in one week. What a coincidence! It makes me appreciate them even better. Sometimes maybe things do happen for a reason.