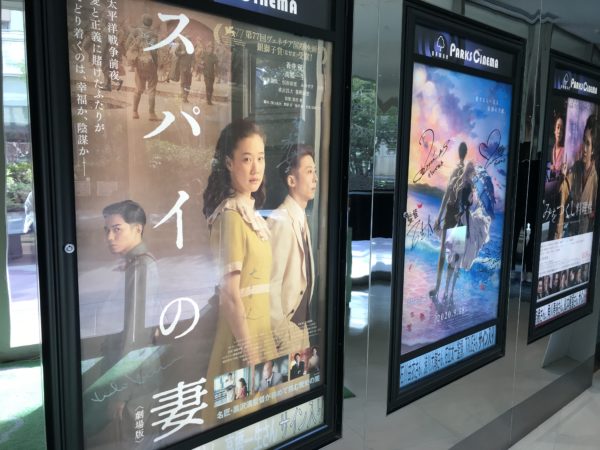 I went to see a movie called “Wife of a spy”「スパイの妻」, which won the Silver Lion award at the 77th Venice International Film Festival this year.

The story started in 1940s before the Pacific War during World War 2. A Japanese merchant went to Manchuria in China for business. There he witnessed the uncivilized behavior of the Japanese army towards the local villagers. After he returned to Japan, he decided to reveal the awful secrets to the world. Then he and his wife tried to flee to America from Japan.

I was satisfied to watch the actors speaking old-fashioned Japanese.

Although this movie was based on a serious subject about the war, it was filled with many romantic and beautiful scenes, so it was not as dark and solemn as one would expect. I felt like watching a stage performance. The story unfolded at a good pace and the dialogues were long but intense. The performance of actress Aoi Yu was amazing. The way she spoke in the movie makes me feel like I was watching a movie star from the Showa period. I was very satisfied to watch the actors speaking beautiful and old-fashioned Japanese.
I especially liked a line that she shouted “Omigoto!” meaning “Bravo!”. With only one word, she was able to express how sad she was, but at the same time she remained strong and cool in the scene.

This movie was thought-provoking to me.

It has been a while since the last time I went to watch a movie in the theater due to the pandemic. It was a wonderful movie that taught me a lot about the Pacific War and the unit 731, which I didn’t learn much when I was a student. It was thought-provoking and the ending remains an unsolved mystery to me. Nevertheless, I like this movie and I hope you will enjoy it too.