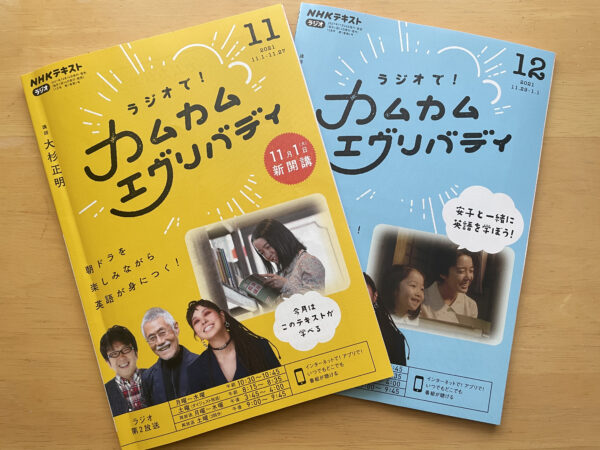 I watch the NHK morning TV drama series “Come Come Everybody” every day. It is a moving story (but full of turbulences!) in which a female hero listens to an English course on the radio and learns English while opening up her own world. Every time I watch it I cry.

I’d like to show you a radio program and its text book.

This time, leave the story explanation aside, I’d like to show you the radio program “Come Come Everybody on the radio” and its text book. They belong to this morning TV drama. The content also explains the English used in the drama, commentary on songs, practice exercises explaining the content of the drama in English, and the social background related to the drama. The teacher is Mr. Oosugi Masaaki who was a teacher of NHK radio broadcasting English lesson from 1980’s to 1990’s. Have you ever studied English using radio? Yes, I have. I learned English from Mr. Oosugi on the radio. He was the best teacher for me when I studied English on the radio. These days, people can study English with many ways, such as the internet. Before the invention of the Internet, the radio English program was very popular.

It’s like a TV drama fan meeting for me.

Anyway, the radio starts after the TV drama finishes. So it is like a TV drama fan meeting for me. You know, you want to share your emotions with someone after viewing an episode. The other radio hosts are “AI” san, who sings the TV drama theme song, and Mr. Amano Hiroyuki, a comedian. The two join in from the viewer’s perspective of the drama to lighten up the radio show. Their conversation is bright and interesting. Their personality not only motivates me to learn English, but also inspires me.
You can listen to the radio program with smart phone using these free apps.
Live broadcast: 「らじるらじる」 https://nhk.jp/radio
Recorded shows:「NHKゴガク」 https://nhk.jp/gogaku
You can also buy the text book.

I recommend you this radio program if you like English and “Asadora”(morning TV drama series). I hope you enjoy it.
“On the sunny side of the street”♪♪♪