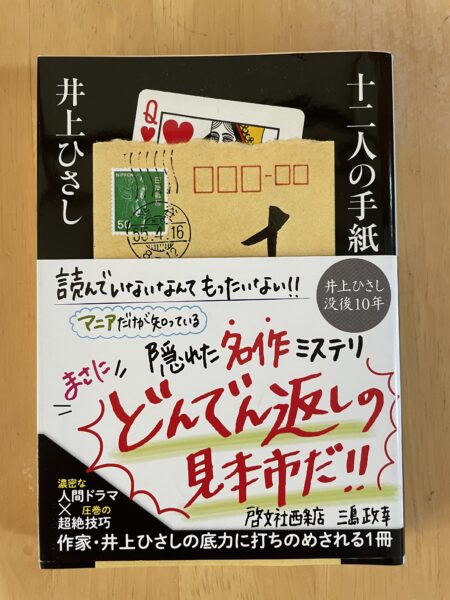 It is a small joy when the book I read was interesting.

I feel lucky when I actually enjoy reading the book recommended by others.
I like reading books because it makes me happy. And when someone recommends a book to me and I actually like it, it makes me even happier.

A while ago, my cousin recommended a book called 「十二人の手紙」”Letters of twelve people” (written by Hisashi Inoue) on her blog, so I read it. My cousin reads a lot of books, so she is a connoisseur of books.
The book was set in Showa era. It is a series of short stories composed only of letters addressed to someone by twelve people. The stories are scary, sad, loving and so on. Most of the stories are not so happy, actually they are rather unhappy or related to death, but there are some dark humor and I don’t feel gloomy after reading them. There is always a twist at the end of each story.
And the characters in each story, which have nothing in common, are connected in the final story! I was amazed by the author who can think of such surprising plot.

The message in letter is heavier and more dramatic than that of a smartphone.

Back in the old days when communicating with letters was the norm, it was really time-consuming to write letters and wait for a reply. It takes effort to write so each letter was valuable. I felt each message was heavier than it is now in the smartphone era. It was more dramatic in the letter era.

I highly recommend this book, which my cousin enjoyed and I also enjoyed. I hope you will enjoy it too.