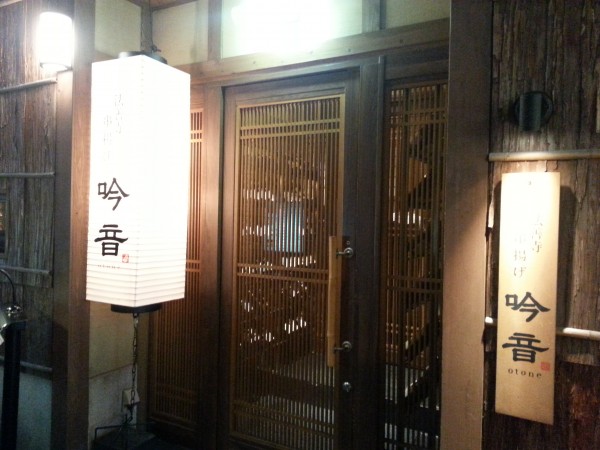 A man from San Francisco is traveling in Japan for a few weeks with only his backpack. He is a friend of my friend M’s relative. One day, M and I met him for the first time. We went out for dinner, for Kushi-age at a restaurant called “Otone” in Houzenji-yokochou, Namba.

He took a picture for each dish, carefully. He even took picture of the bitten kushi-age to show what’s inside. He was also interested in every ingredient. As we explained each dish to him, we realized that he actually knew more about Japanese food and restaurants than us.

Truffle and caramel were very difficult for me to pronounce. About truffle, I explained that pigs dig the mushroom and he understood. Of course he knew what a truffle is, but my pronunciation was bad.
We had a wonderful time.

After a few days, I read his Facebook. There were many pictures about that dinner with detailed comments for each food on Facebook.

And I found an interesting post that one day he had EkiBento for both lunch and dinner on a Shinkansen. That day, he went to Kyoto, but Kyoto was too crowded to have dinner. However, he sounded satisfied with the taste of the Ekiben “Gyuniku-domannaka” and “Gyutan-Bento.”

I feel bad that tourists have problems with over-crowded restaurants and hotels in Kyoto and Osaka.
Actually one day, he couldn’t make a reservation at hotel in Kyoto and Osaka. Then he stayed at Nagoya. Next day he went back to Kyoto again.

I respect the tremendous effort he put in to trying out all sorts of Japanese food.