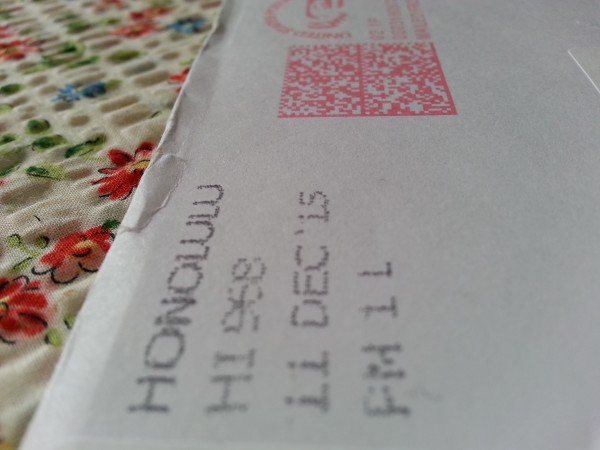 My friend, T lives in Hawaii, after she married to an American. We are friends from junior high school. We know each other’s address and e-mail but we don’t contact often except exchanging X’mas cards.

I have been wanting to connect with her through facebook for a long time. I sent messages a few times, but she didn’t reply. Maybe she didn’t notice them. Because she was blocking friend requests from others. Therefore we couldn’t connect on facebook.

A letter is better than SNS!?

Last Christmas, I got her X’mas card. In return, I sent a Nenga-jou(a New Year card) to her. I told her about approving my friend request on facebook.
After the New Year, I got a message from her on facebook. Finally, we become friends! It took so long to connect with friends on facebook.

I found that facebook is very convenient, useful and quick, but sometimes when facebook doesn’t work, we could still contact with each other using a more primitive way, a simple hand-written letter.

It’s a happy thing if you can connect to your old friends who you haven’t met for a long time. 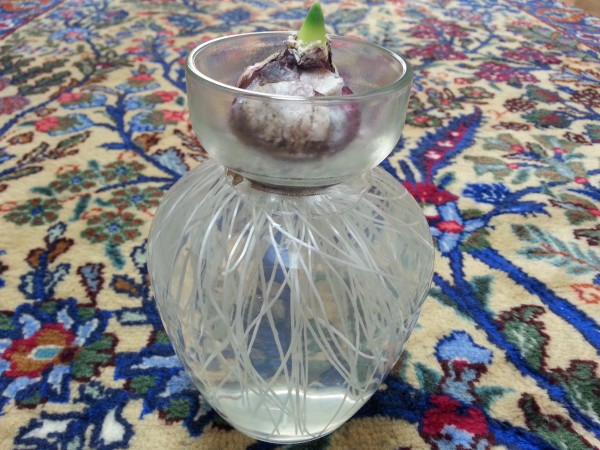 My friend gave me a hyacinth bulb in November.
She gives it to me every season. And I grow it to bloom beautiful flowers.

First of all, I put the bulb in a special glass vase full of water, and put the vase inside a dark shelf and wait until some roots grow from the bottom of the bulb. When a bud comes out, move the vase to a warm place. Then all you need to do is to change the water sometimes and wait until the flowers bloom.(but I almost never change :p) 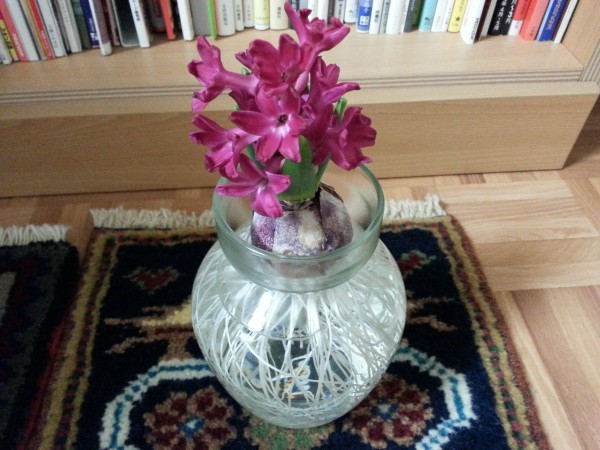 Look! How cute it is!
However, it is not in a good condition. Because the stem didn’t grow as tall as it should be. I think it was too warm in my house. This hyacinth felt like blooming flowers before its stem grows tall enough.

Anyway, I am happy to see blooming flowers which I grew myself.
Thank you, my friend.  You give me a wonderful present every year.
Every time I see a hyacinth, it reminds me of you.

Do you usually buy something on sale?

I used to buy things like clothes, small things and etc. This time I didn’t buy anything except UNIQLO’s fleece which was half-priced.
I was surprised that I only spent money on this! Because, I used to be kind of a shopaholic. But recently, I am starting to be able to control myself and reduce my spending. I don’t hang around shops like I used to. I recognized that I have enough things when I had to move to a temporary house.

I like this purplish red fleece.
I almost wear it every day when I am at home. 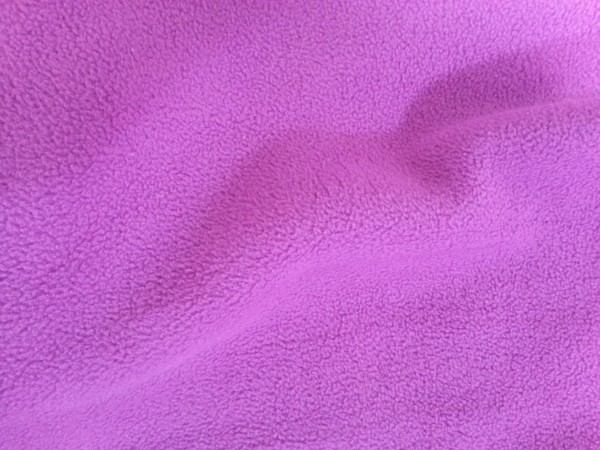 #962 I got totally hooked on “the BiG BANG THEORY” 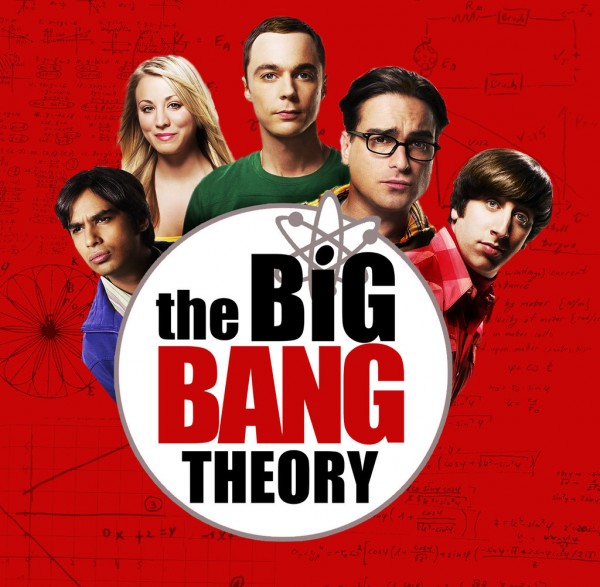 I got totally hooked on it

I’ve started watching an American sitcom called “the BiG BANG THEORY” since last month. It started in 2007 and is still continuing and has very high TV ratings.

The story is about four nerd scientists and a cute blond girl’s lives in California. Four nerd scientists have high IQ, but they act like teenagers. Their minds are full of comics, TV games and women.
One of them, Sheldon who is the most clever character is super funny and mean. He always looks down on people, especially a blond cute girl, Penny who is a waitress working at the Cheesecake Factory. Everybody thinks he is annoying, but also a lovable person.

I can’t stop watching it

I cry sometimes because it is too funny.
I recommend you this sitcom, but I don’t know if you can’t stop once you start watching it. 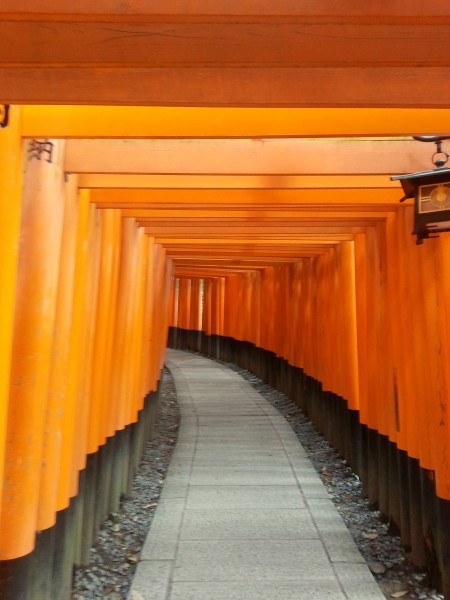 A moment when nobody was there.

Welcome to the Wonderland!

Finally, I went to Fushimi Inari Taisha in Kyoto which was the most popular place for foreign tourists. Because, there are so many toriis, more than 3,000!? who knows? These tories have very beautiful bright red color.
There were many foreign tourists. They took pictures a lot. And they looked like they were having a great time walking into the tories. It felt like some sort of an attraction in an amusement park.

My friend and I enjoyed the hike so much that we almost forgot the time. As my legs were getting tired, we went back down.
On the way back, we had ama-sake with ginger made us really warm.

My eyes were glued to a peculiar fox hat

As we were leaving the shrine, I saw a foreigner who was wearing a fox hat, which made me wonder who would buy this kind of funny hat at a shrine.
However, surprisingly it suited him very well. 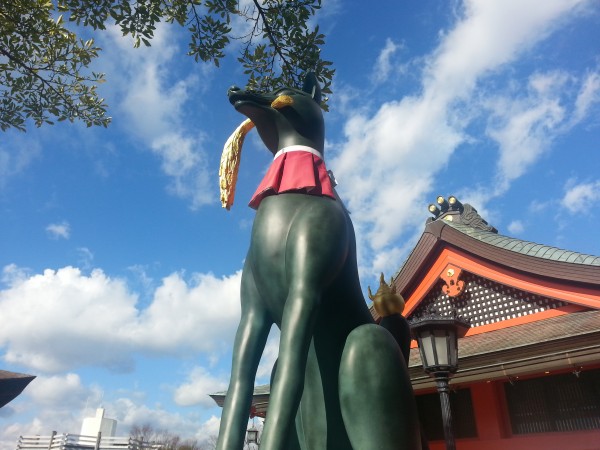 a fox biting an ear of rice 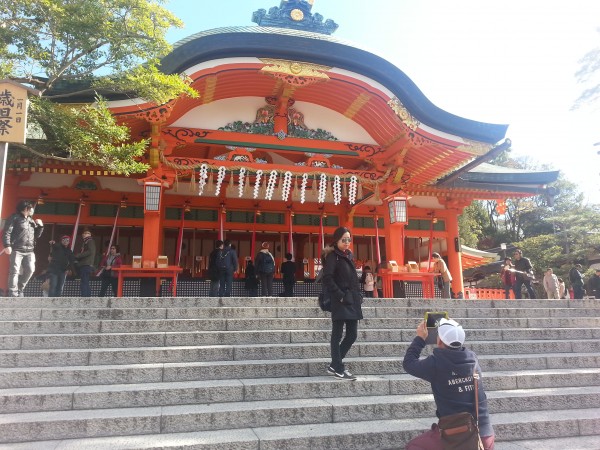 a man who is taking a picture for a posing woman 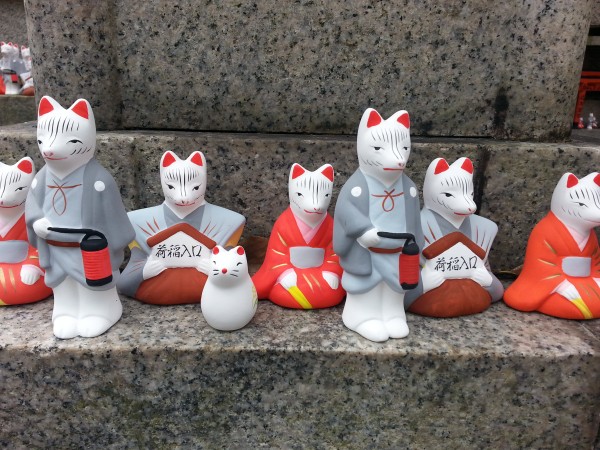 dolls for wishing for good relationship

#964 I met someone whom I wanted to meet

I fell in love with it!

The painting was in a beauty salon where I have a hair cut in my town every month. At the moment I saw the painting, I immediately fell in love with it.
The painting was the face of a bear in blue. The color was dark and cool but the bear’s face was gentle. The contrast attracted me.
Then, I asked the hair salon owner “Who painted the picture?”
He answered one of his customers who lives near the salon. I wondered if the person could teach me painting.

One day, the picture was gone, because it was sold. I felt very sad. Then, I decided to meet the painter.

I met someone whom I wanted to meet

We met at a Starbucks, the only one in our town. It was the first time I met her so I was quite excited. She was a nice person, exactly like I imagined. I knew that that blue bear picture was painted with acrylic. We talked a lot.
Fortunately, she said that she can teach me painting, though she has never taught anyone. I’m going to learn painting. 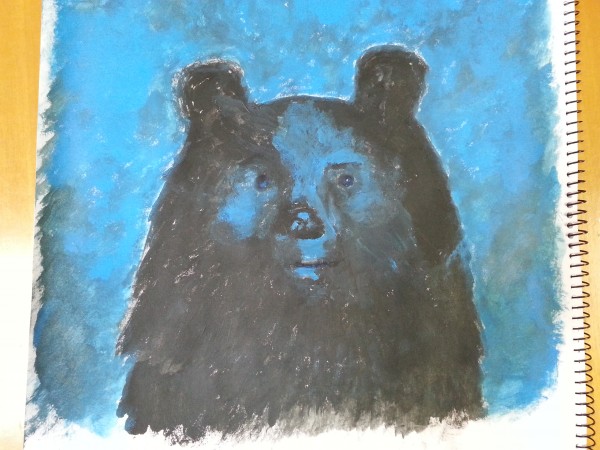 *The painter who teach me is nanaki jun.