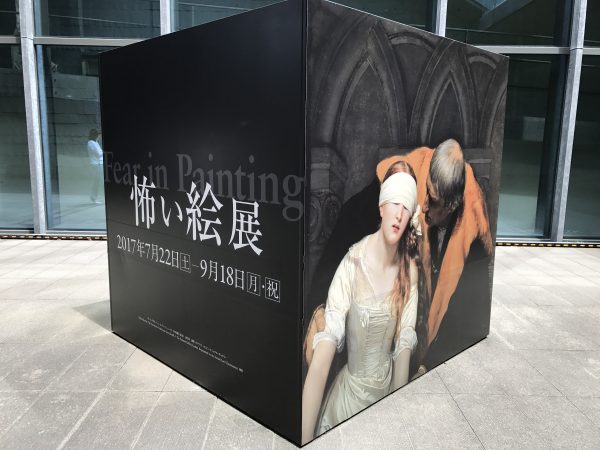 I went to an exhibition called “Fear in Painting” at Hyogo Prefectural Museum of Art.
The exhibition is supervised by Kyoko Nakano who is a scholar of German literature and a writer. Her famous book series are “Kowai-e”(Fear in painting). I have some of her books.

“The Execution of Lady Jane Grey” 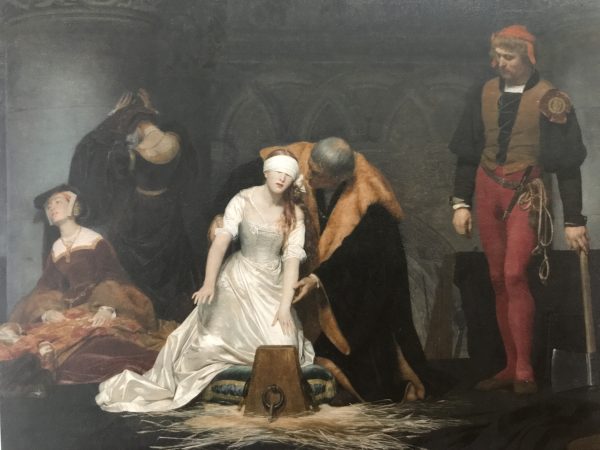 I wanted to watch a painting which has the title of “The Execution of Lady Jane Grey.” It was painted by Paul Delaroche in 1833. It is the first time that this painting is exhibited in Japan.
The blind-folded girl had become the queen of England for only 9 days. The painting illustrated the moment that she was about to be executed. An executioner was standing besides her with an axe. Two maids were bursting into tears at the side. The queen was only 16 years old.
When I stood in front of the painting, I felt scared and sad. Since it was a lot bigger (2.5m x 3m) than I originally thought, I was moved its size. I felt like I was witnessing the live and fearful execution. And the painting was very beautiful.

The Images give me a chill

It deepens the fear once you know the background of the story and imagine what happened afterwards. I watched these paintings in this hot summer day and felt a little scared and chill.
This exhibition is on until September 18th. 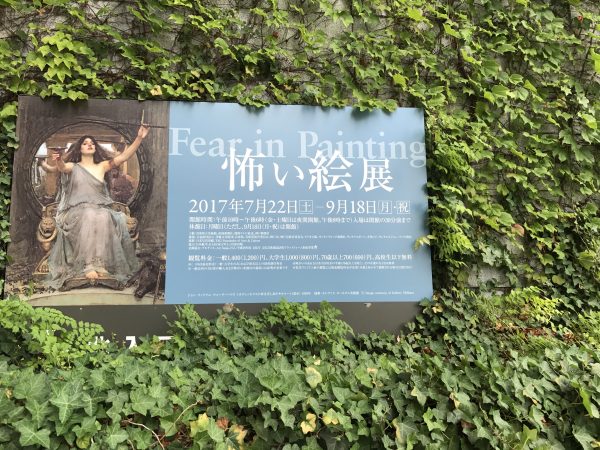 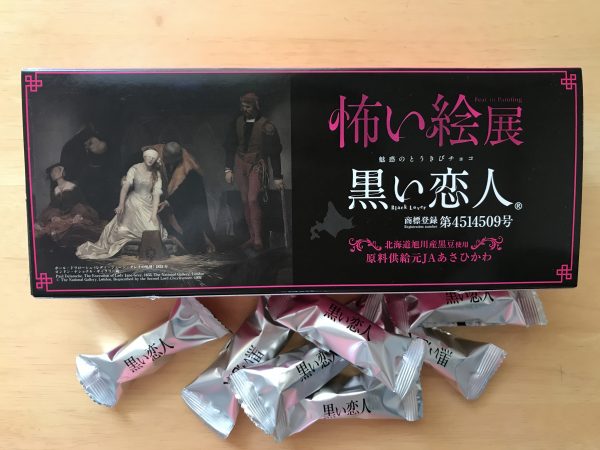 ↑I bought a box of chocolate. This name is unique, not “白い恋人”. 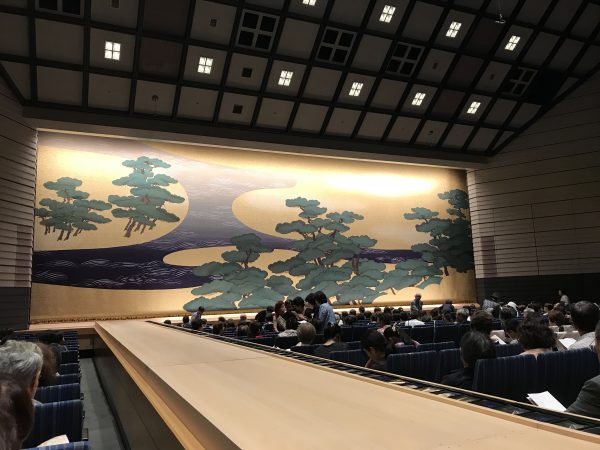 Kamigatamai is one of classical Japanese dance which started in Kyoto and Osaka in middle of Edo period. The style of the dance is different from the ones in Kanto area.

At Kokuritsu Bunraku Gekijyo in Osaka 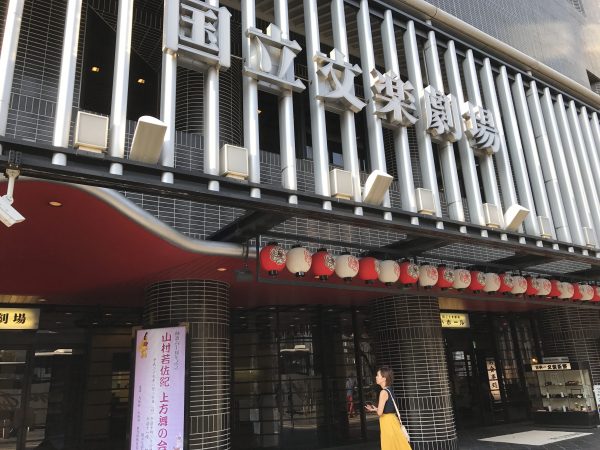 I went to see the “Yamamurawakasaki Kamigatamai” at Kokuritsu Bunraku Gekijyo on August 20th. My friend Wakashizuwa san who is a master of Yamamuraryu, performed dance on the stage by herself. She was wearing light purple kimono and Japanese traditional style wig. She danced in front of a folding screen and lamp stands. The background music was a folk song played by shamisen and sang by a female voice.

Her performance was so beautiful, sophisticated and elegant. The dance was “Mamanokawa” which express a woman’s sadness. Through her dance, she expressed the emotional ups and downs of the character and I was dazzled by her charming performance.
Her performance took about 15 minutes.

It’s exciting to have such a new experience.

After her performance, my friend H and I rushed to backstage to say hello to Wakashizuwa san. Although, there were many of her fans, we took a picture with her. 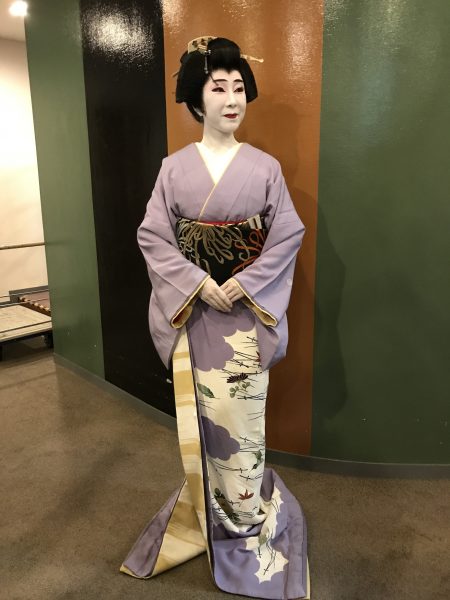 ↑Wakashizuwa san was at backstage
It’s exciting to have such a new experience, since I’ve never watched kamigatamai.
Now I am starting to wonder how different kamigatamai is when compared to the dance in Kanto area. 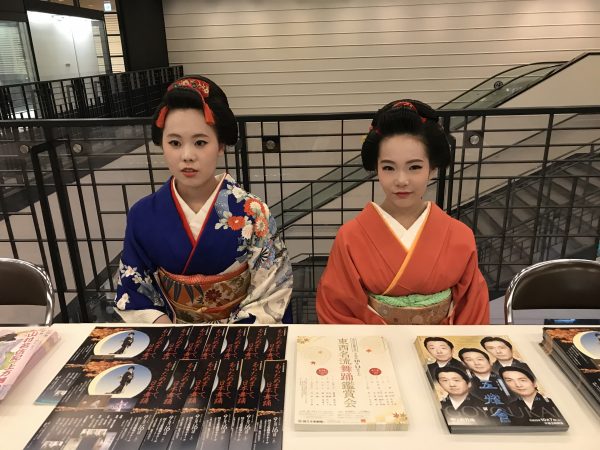 ↑High school and junior high school students were working as receptionists. Their hair is natural hair, not wig.

#888 I read a book “うつ・パニックは「鉄」不足が原因だった”（”Iron deficiency is the cause of depression and panic disorder.”） 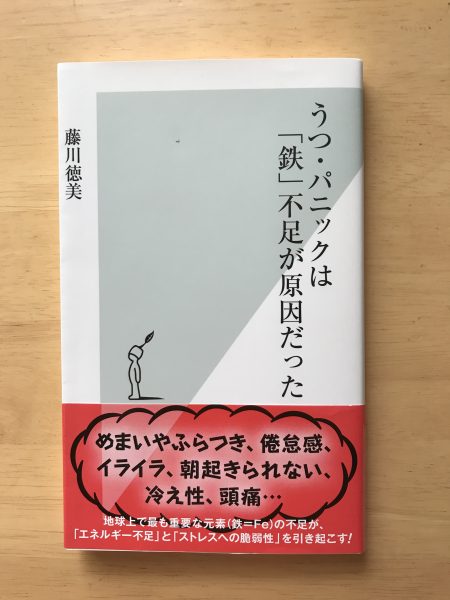 I feel dizzy and get tired easily recently. Then I went to a doctor and had my blood checked. The result was iron deficiency. I got a medicine which is called increment syrup.

I found a book.

One day, I found a book. The title is “うつ・パニックは「鉄」不足が原因だった”（”Iron deficiency is the cause of depression and panic disorder.”）
The book says that more than 80% of Japanese women are lacking iron. Most women underestimate the importance of iron in their diet. The author is Tokumi Fujikawa who is a Doctor of Medicine and the owner of a psychosomatic medicine clinic.
According to him, feelings of tiredness, weakness, coldness, headache and dizziness are caused by iron deficiency.

What is the cure? 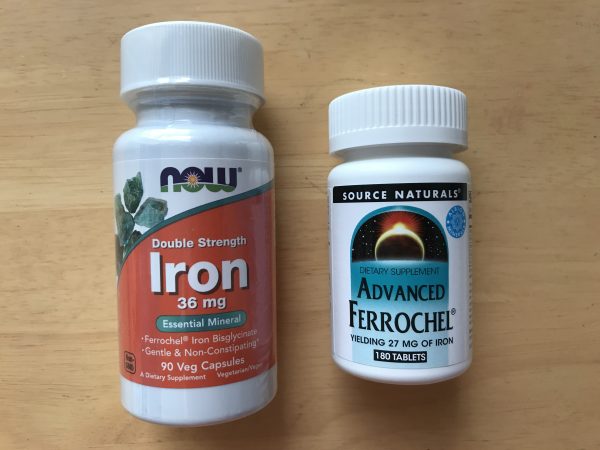 I ordered both of his recommendations on the internet.
I’ve just started to take it. I want to share my body condition 3 months later with you. 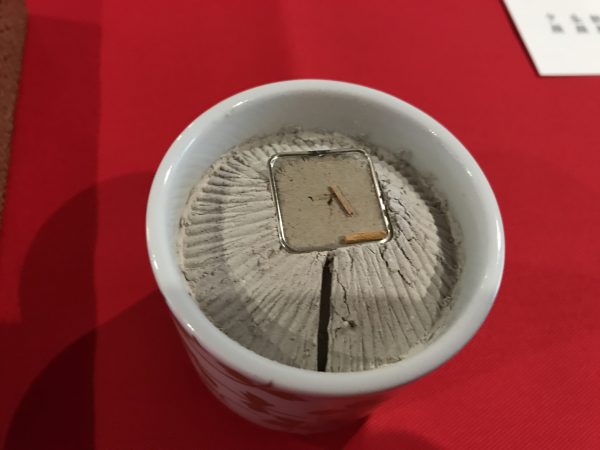 I had a trial lesson of “Kodo”, a kind of traditional Japanese incense art.

Cha-do, Ka-do and Ko-do are the three major traditional performing arts in Japan.

There were a master, a server and 11 students. All the students including myself, were new to Kodo. We learned how to smell and hold the koro (an incense burner) our own hands. After smelling the incense, you have to turn your face to the left to breath out every time.

We learned a Kodo game. 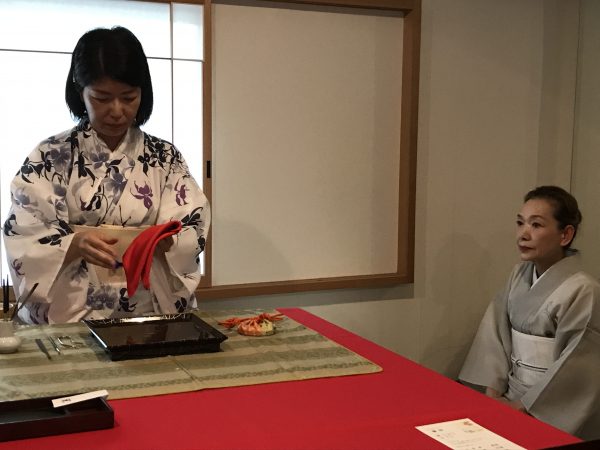 The rule was that we smelled three koros and had to find out the difference. Two of the koros had the same smell. We just need to pick the one that is unique. The smell was not as distinguishable as I expected. They all smelled nice, gentle, and a little bit sweet.
Actually I couldn’t tell which one was which. I felt it was difficult for me. 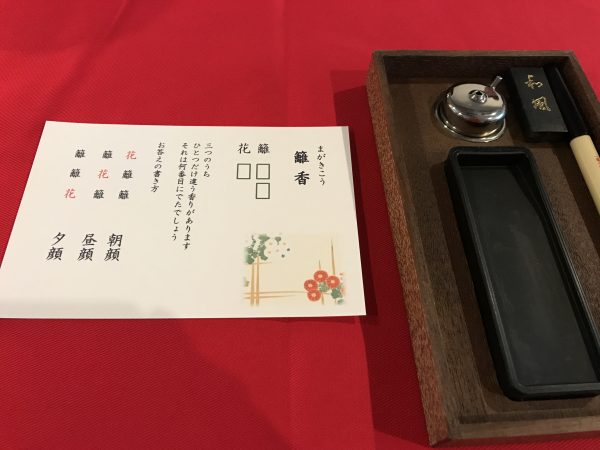 After we finished smelling the three koros we wrote our answer on our own small piece of paper. The answer were represented by 3 types of flowers. If the first koro is unique, you choose the “asagao” as your answer. If you choose the second koro, the flower is “hirugao”. The third koro is “yugao”. That is sophisticated, isn’t it?

Then the master wrote our individual answers on a paper with a brush. Her handwriting was beautiful. 9 out of 11 students were correct.
I got it wrong, so I was a little embarresed. 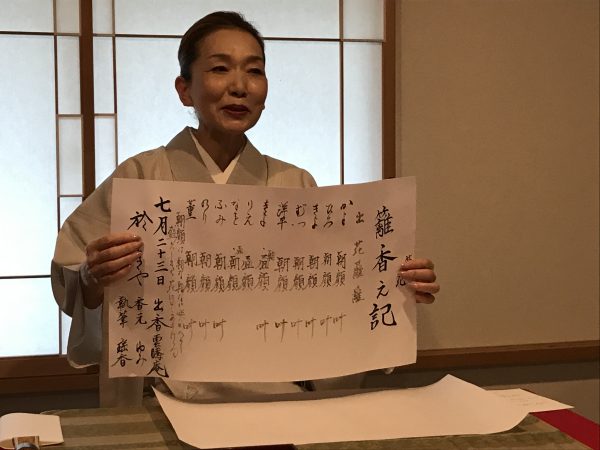 I think it was a precious experience and enjoyed it very much.
Moreover I was happy to see that 5 people put on kimono and yukata in the lesson.
Wearing yukata matches the summer night, especially, that night. 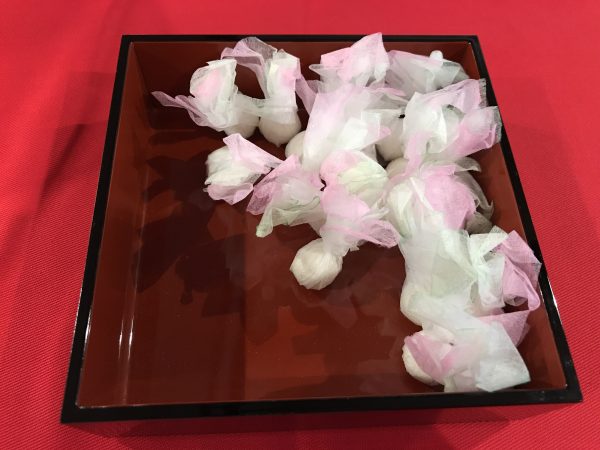 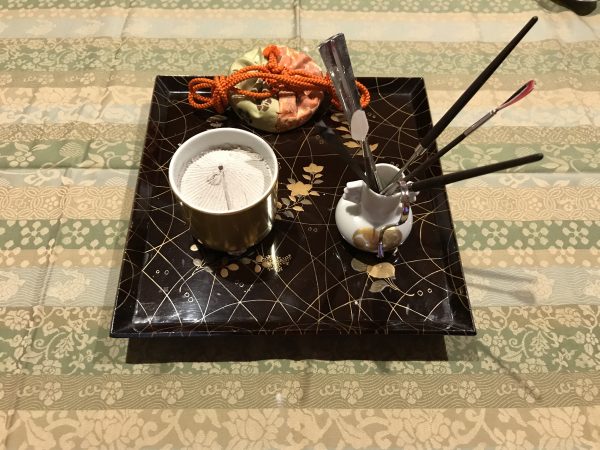 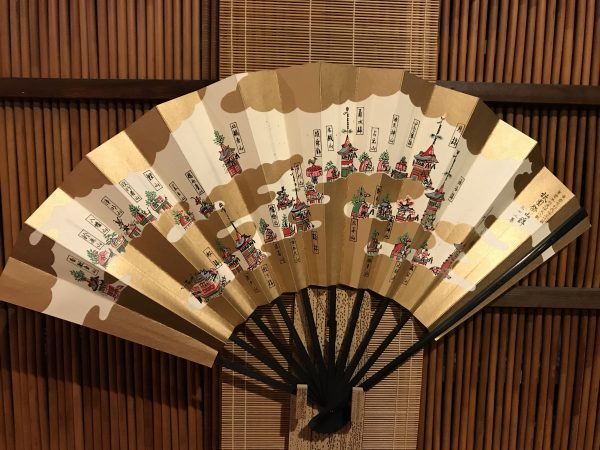 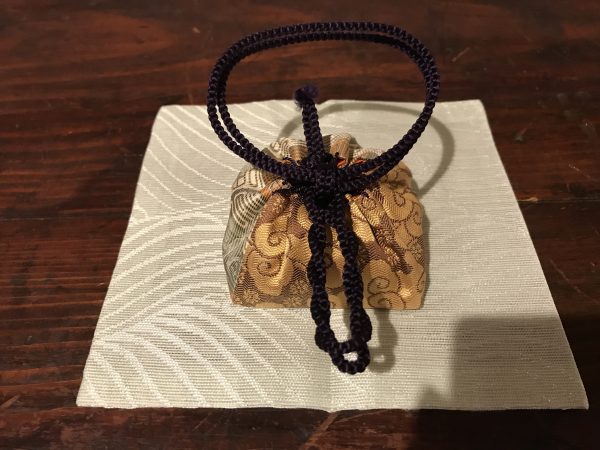