#866 Kids have a lot of potential for growth. 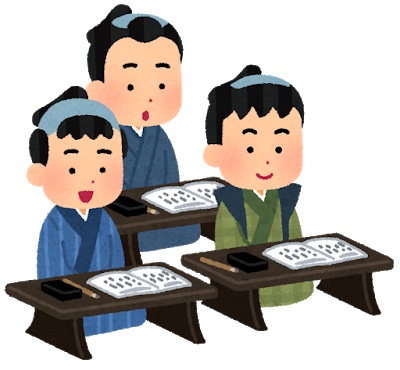 At my work, I teach classes at cram school. Since the beginning of this month, I’ve started to teach English to the new 5th and 6th grade students on how to read Aesop’s fables.

At the first lesson, it was the first time for them to read English stories. Since there were many new words, they seemed very confused.

After each lesson, I was exhausted because I had to read aloud the English sentences many times for them. And I was worried if they would lose their interest in English because of its difficulty.

The other day was their third lesson.

A 5th grade boy recited a paragraph of Aesop’s fables from memory. It was perfect. He was the first who recited it and his English pronunciation was very good. Everybody in the class was surprised. After his performance, three students raised their hands and said “I can do it, too!”
Each of them read out in a loud and energetic voice. (Although it was not a recitation.)

They have a lot of potential for growth.

I was quite moved because I could see that they practiced a lot. And the same time, I found that they like English and they have a lot of potential for growth. Their attitude motivated me to try to recite Aesop’s fables myself. 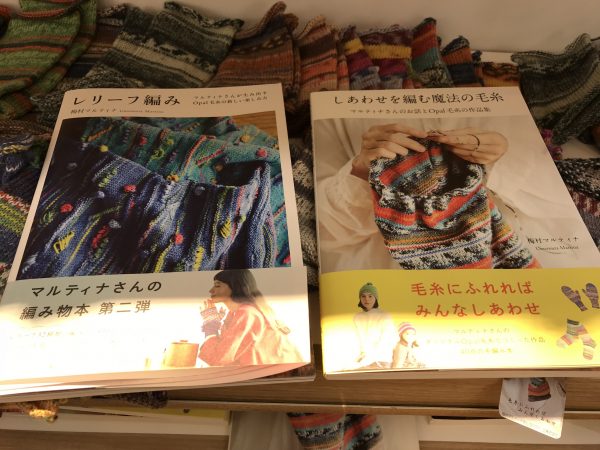 Knit caps on a TV program

Recently I watched a NHK TV program called “At Home with Venetia in Kyoto.” I was very interested in these beautiful knit caps that were made by Umemura Martina on TV.

I found the same knit caps. 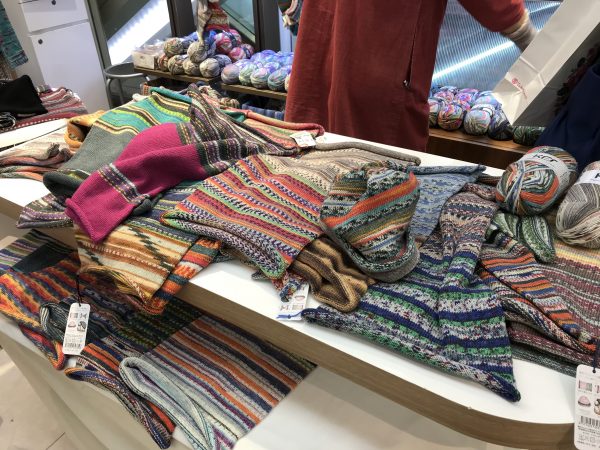 Fortunately, I could find the same knit caps at Takashimaya department store the next day. It was available for a limited time at a small booth. At first, I was supposed to be just looking but I couldn’t stop myself from buying a knit cap because of its attractive design.

A waist warmer or a knit cap?

The knit cap’s shape was cylindrical and looked like a waist warmer that had two kinds of weaving patterns. 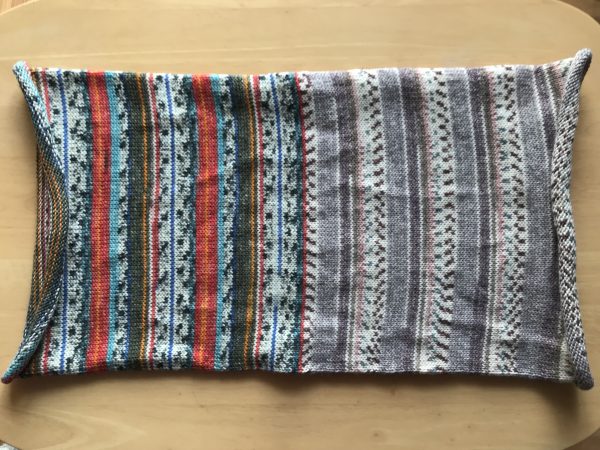 How does it become a cap from a waist warmer?

First, turn it over and twist the middle part. Then hold the twisted part with one hand and fold one side of the warmer onto the other side to make it into a cap. Thanks to the two wearing patterns, the cap can be reversed and show a totally different design. These knitted items were very unique. 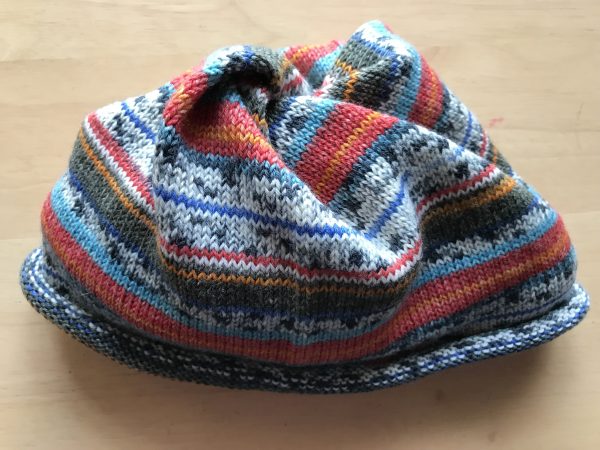 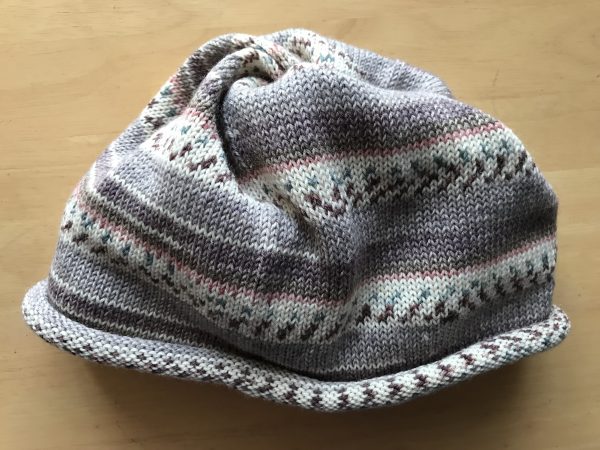 The booth had many colorful yarn balls. Since each yarn ball already had unique design, when you make a knit cap, you just need to knit one ball. 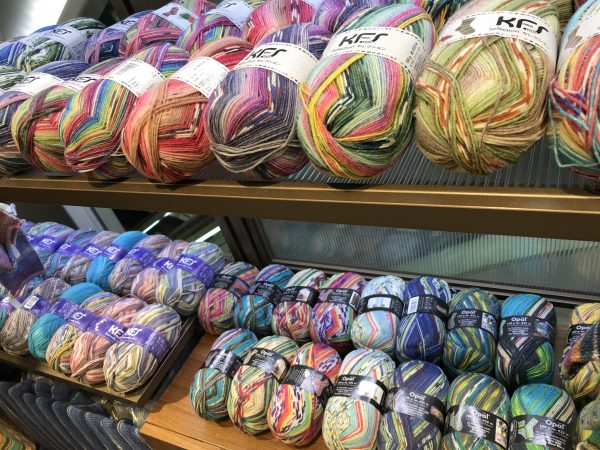 “What kind of pattern will come out?” Some people may think of this when knitting it.

These knit balls were made in Germany. Umemura Martina, a German lady, teaches people how to knit and sells German knit balls named “Opal”.
You can turn the knit cap into a neck warmer, too.

It was very warm when I went out in this cold winter. 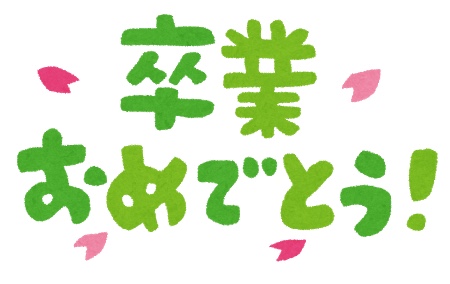 I had my final lessons for 6th grade at the cram school last month. They were going to leave my class and go to the class for junior high school students. And I’m going to have new 6th graders in February.

In the final lessons, I wrote a proverb “When life gives you lemons, make lemonade.” on the whiteboard and explained it to the class. In this case, lemons mean some difficulties in life and lemonade means something good. Since I thought the phrase was a little bit difficult for 6th grade to understand, I drew a lemonade on the board and showed them a real lemon which I brought from my house to help me explained to them. They listened well and looked like they were interested in my talk. Some students were writing down the phrase in their notes.
I said “Don’t just study English for school and marks. Study English because it can bring you a lot of opportunities and fun in your future.” That was my last message to them.

I hope kids will continue to enjoy studying English.

After the lesson, a boy came to me and picked up the lemon to play with it.
I told him “I’ll give it to you.”
He was very pleased but he said “I’m worried that I may spoil it.”
I said “Don’t keep it by yourself. Give it to your mother when you get home!”

At the second class, a girl came to me at the end of the lesson and she said “I want this lemon.”
I said “Sure.”
She smelled the lemon and said “I like lemons.”

I think it was a good idea to bring lemons to the classes because they probably left a good impression to the students on their English study. 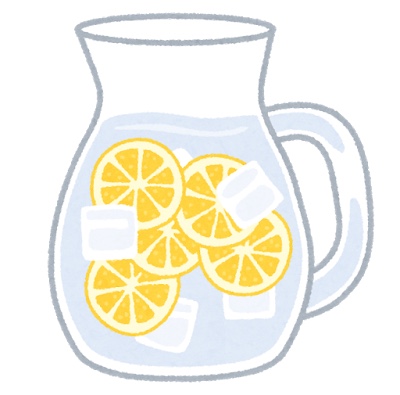 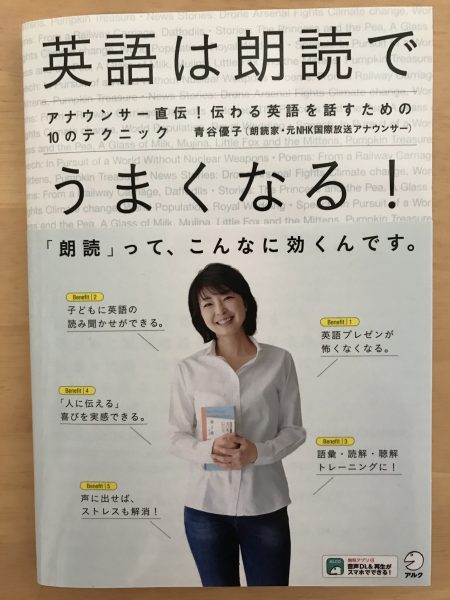