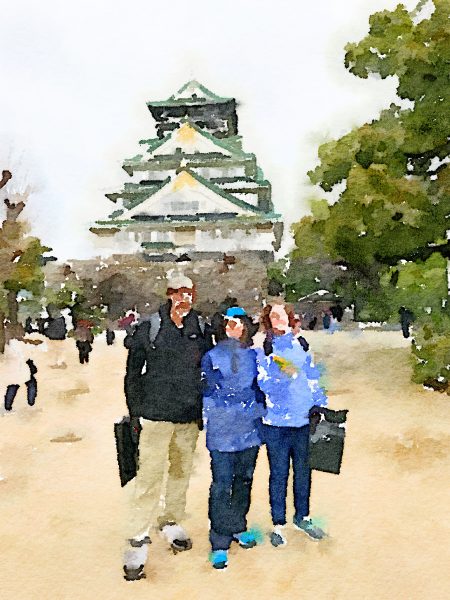 On the second day, I took my ex-host family to Osaka castle. It was a rainy day. They didn’t have umbrellas. They ware just wearing rain jackets and hats. They said “This is Seattle style!” It looked nice on them. We walked about 15minutes from Morinomiya station to Osaka castle.

We entered the castle tower(admission fee was 600 yen).
There are many displays where one can learn the history of Osaka castle. The miniature figures depicting the Summer War of Osaka were popular among the foreign tourists.
They took a lot of pictures of it.↓ 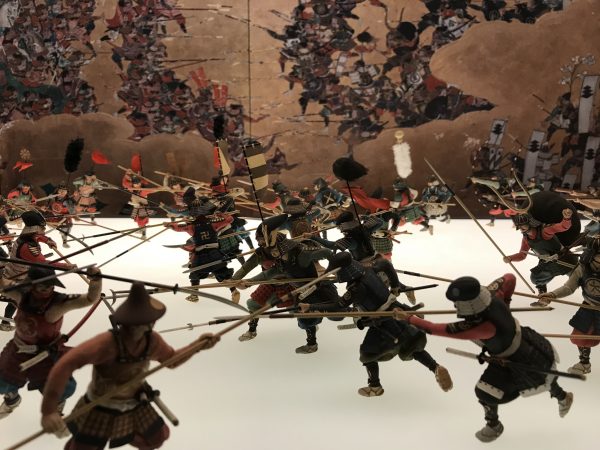 There were so many explanations and dioramas of Hideyoshi’s life in the tower. When my host father asked me about how the Summer War of Osaka started. I answered it, but I didn’t think I explained it well. I thought I should have learned its history more beforehand.
In fact, I was surprised that they were studying the explanations very carefully. Way more than I expected. 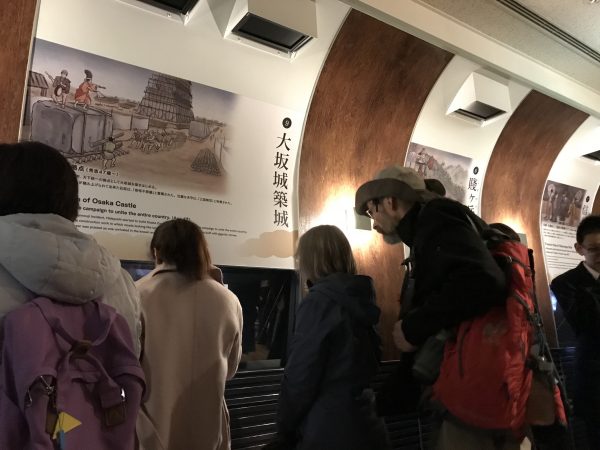 Go back in time

After we left Osaka castle, we visited MIRAIZA OSAKA-JO that is in front of Osaka castle.
There were some souvenir shops and restaurants in the building.
It was fun to see Ninja items and Samurai items. My host parents bought two folding umbrellas which have a ninja-sword style handle for their grandsons.

We felt like we had traveled back in time on that day.

↓Lunch was ramen. It made our body warm. 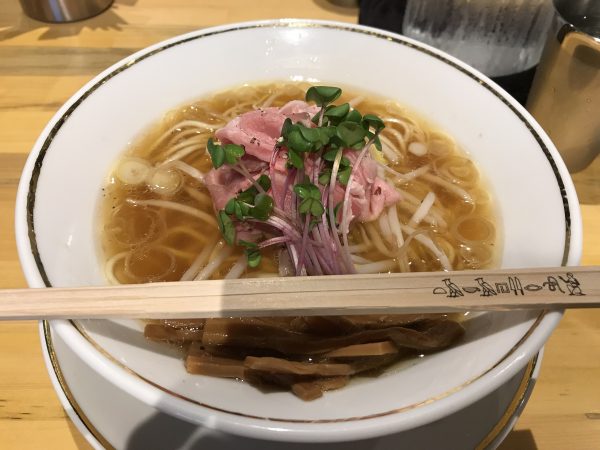 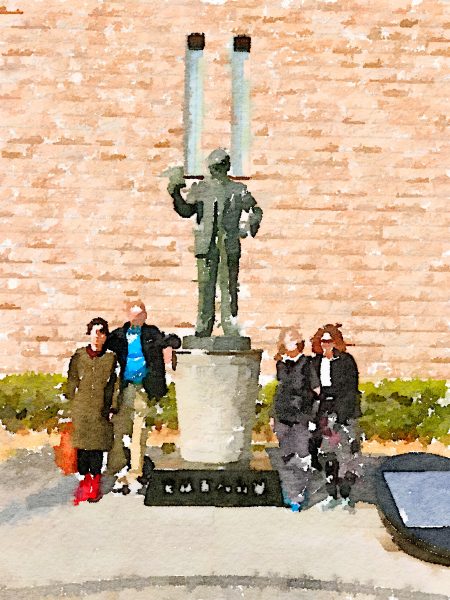 My ex-host family from Seattle came to Osaka!

My ex-host family from Seattle came to Osaka, so I spent a day with them to show them around.
I finally got to meet host mother that I had not seen for 25 years!
We talked a lot about what happened in the last 25 years on the train to Ikeda station from Umeda station. We went to the Cupnoodles Museum in Ikeda city to make chicken ramen.

We made instant noodles from scratch by hand. We first started with kneading the wheat flour and them deep fried it. A staff helped us a lot in the process. We were wearing aprons and yellow “sankakkin” bandage printed with big chick’s eyes. 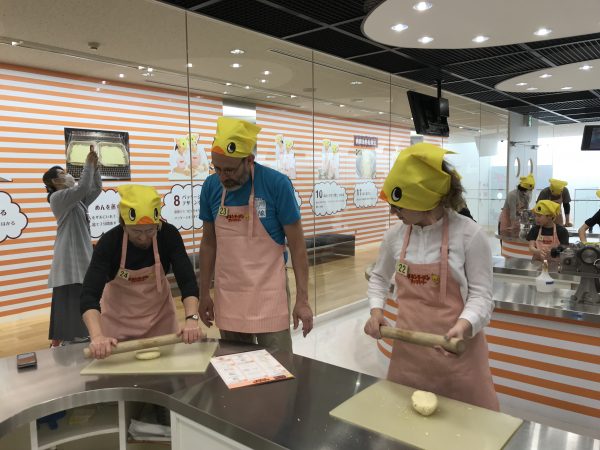 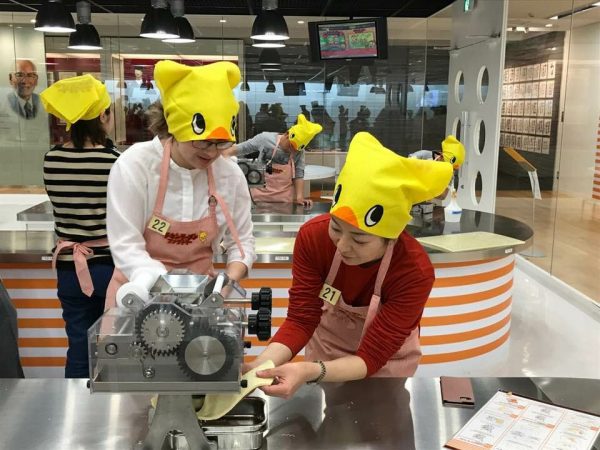 ↑Thin out the dough sheet 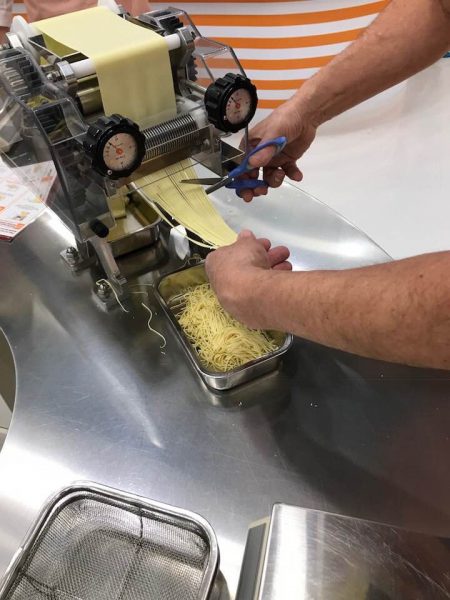 ↑Cut the dough sheet into noodles 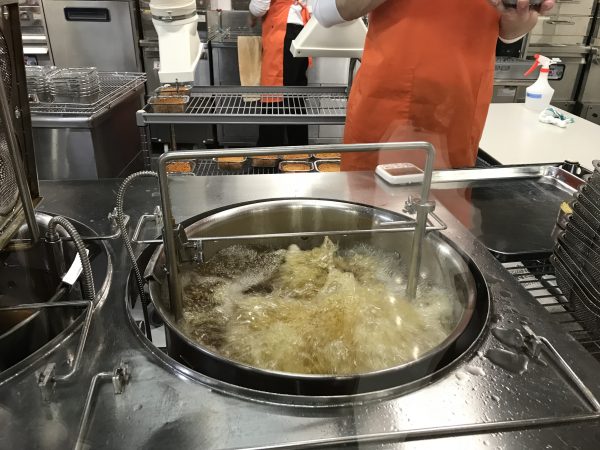 ↑A staff flied my noodle in oil.

We drew an original picture on the package of the noodles by color pens. The staff packed our fresh noodles in front of us, then handed to us individually. We got two chicken ramen and a “sankakkin” bandage as souvenirs. 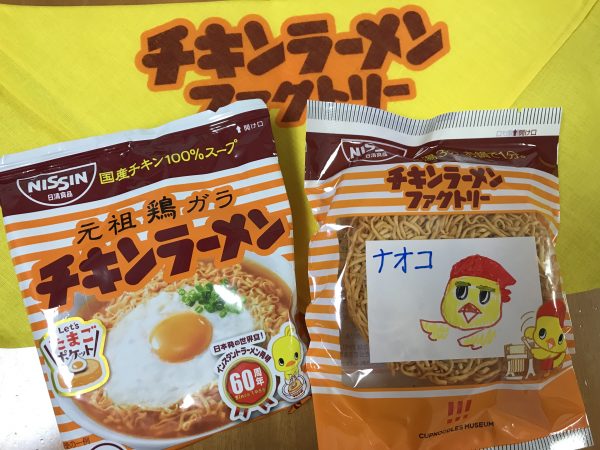 ↑These are souvenirs. Look at my awful drawing!

I recommend you “the birthplace of instant noodles”

This cooking experience was around 90 minutes. It was so much fun!
We also took a lot of pictures. I really enjoyed myself even as an adult.
You can have this experience only 500yen! (You need a reservation.)
Would you like to try it too? 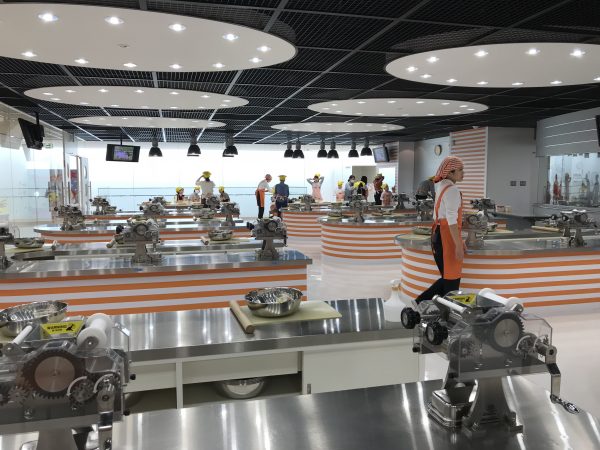 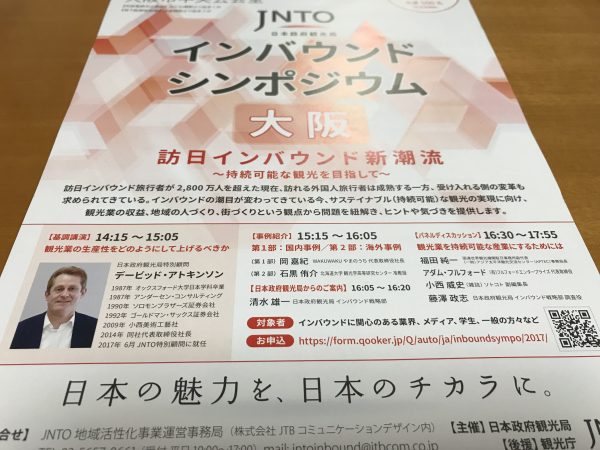 I went to an “Inbound tourism” symposium on last Wednesday.
I wanted to listen to David Atkinson’s talk. He is a special advisor of Japan National Tourism Organization (JNTO). He talked about how to further improve tourism in Japan.

According to him, the tourism industry occupied around 10% of the GDP of the whole world. The number of tourists to Japan ranks 14th in in the world in 2016.  In the international tourist revenue ranking, Japan is the 11th place in the world in 2016.
Japan is unique in 4 aspects; nature, climate, culture, food.
Japan’s biggest strength is “natural”.
Majestic nature is a tourism asset and can earn more revenue than culture. Since natural sightseeing activities usually require long-term stay, tourists tend to spend more money.

On the other hand, the biggest problem is that there are not enough five stars hotels in Japan. U.S.A has 755, Thailand has 110, Japan has 28, even Bali island has 42.
The success of tourism strategy is determined by the number of five stars hotels.
I learned the above from David Atkinson’s lecture.

I hope that many Japanese workers would work at five stars hotels in the future.

I realized how attractive and valuable Japan’s nature is from his speech.
It is important that many tourists come to Japan and are satisfied with Japan’s nature and stay longer and come back again in the future.
I hope that more five stars hotels would be built and rich tourists would spend more money. And I’m looking forward to seeing that many Japanese workers who can speak English would work at five stars hotels in the future. 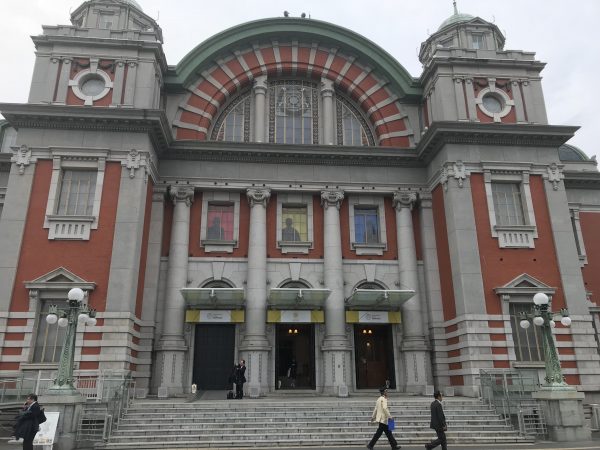 ↑This is Osaka City Central Public Hall where the symposium was held.