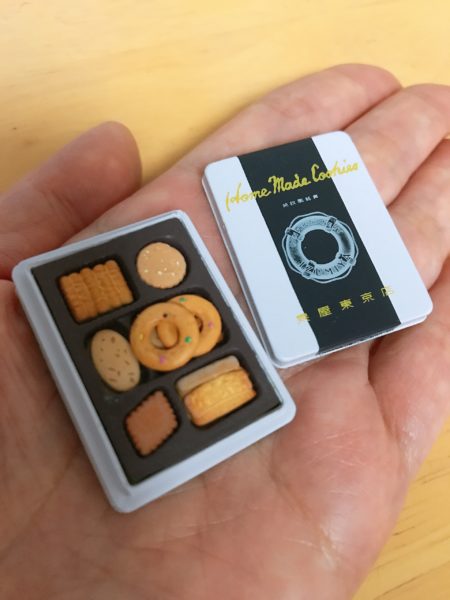 Sometimes I want to try “gacha gacha”(capsule toy machine) when I find something I really like, or when I just want to kill time. I also like checking capsule toys on Instagram and one day I found some really cute capsule toys.

Wow, this feels so nostalgic! 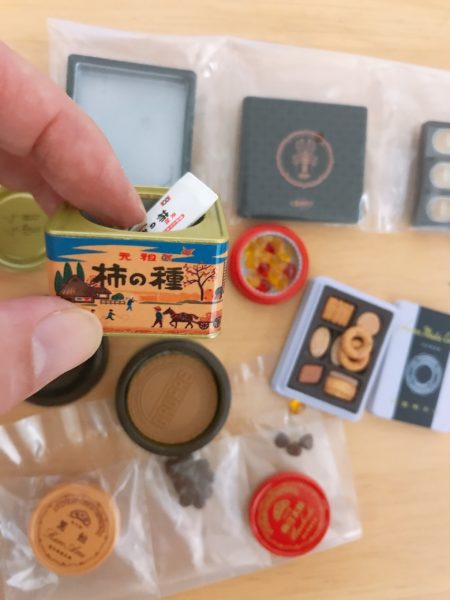 They were famous confection’s miniatures. The series have 5 kinds of confections. I especially want the “Izumiya Tokyo-ten special cookies.” This cookie box reminds me of my childhood because I ate a lot at home and at my grandparents’ home.

I have never seen this capsule toy machine anywhere, so I thought my chance of getting this toy was quite small. Then I found out that I could buy capsule toys directly on the internet. This was “otona-gai”「大人買い」(spending a lot of money on things. Splurge on things that we couldn’t get when we were young)! Each item was 400 yen. There were 5 kinds of them but the total was only 1900 yen. And plus 340 yen for shipping. The total was 2240 yen.
Wasn’t it good for an “otona-gai”? Sometimes it is great to be an adult. 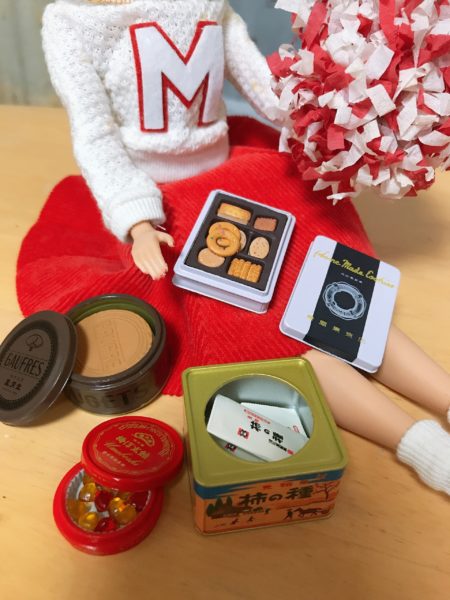 #777 You can listen to the audio book “My friend Hitler” voiced by Mishima. 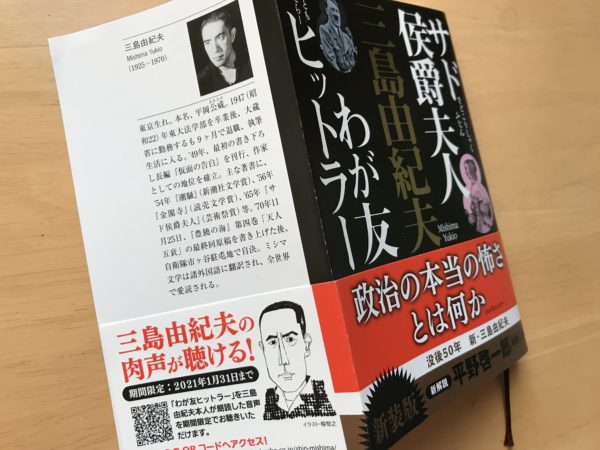 This year is 50th year anniversary of Mishima’s death.

Mishima Yukio was a famous novelist in Japan and was once nominated for Nobel Prize in Literature in 1963. Some of his novels were adapted into movies. He committed suicide by seppuku 50 years ago.
Recently some book stores set up a Mishima’s book corner for his 50 years memorial.

The audio book “My friend Hitler” voiced by Mishima

Since I’ve never read his book, I bought one named 「サド公爵夫人・わが友ヒットラー」(”Madame de Sade / My Friend Hitler”).
The book was probably a script written for a drama play, because it contains only lines of dialogues. Luckily, this book has a QR code and customers can listen to the audio book “My friend Hitler” voiced by Mishima. (The link is only valid until January 31, 2021)
Then, I listened to the audio book “My friend Hitler” (It took about 1 hour and 45 minutes.) I really enjoyed the book because I could hear Mishima’s vigorous voice.

If the book didn’t come with the audio, I think I probably wouldn’t have been able to finish the story.
First of all, it is a difficult book. It doesn’t come with any background information. The story starts right away in the middle of an event. On top of that, the dialogues are also not the common day to day Japanese. I was listening to the audio while reading the book. Sometimes it was difficult to tell which person was talking because it was always Mishima’s voice. I could only tell by following the lines in the book. It was a “team effort” by my ears and eyes. It was quite a special experience.

I’m not telling the story here. But I highly recommend this book and I want you to have this same experience. It’s truly fun.

#778 Refrain from leaving their homes for any non-essential reason 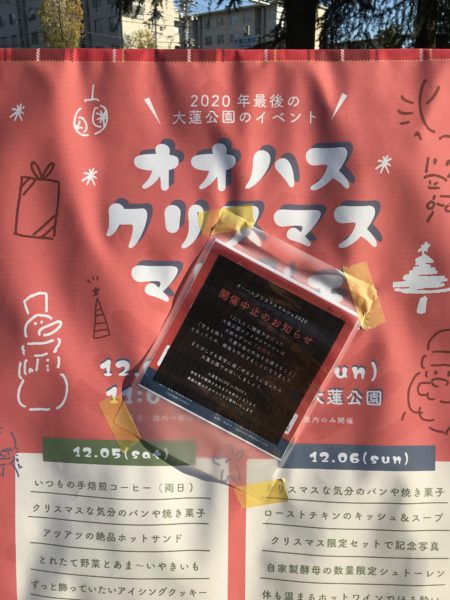 ↑There was a notice of cancellation of the event in the park.

Refrain from leaving their homes for any non-essential reason

The Osaka government declared on Thursday that the occupancy rate of the prefecture’s hospital beds set for serious cases in COVID-19 is expected to soon reach 70 percent. So the officials asked all residents to refrain from leaving their homes for any non-essential reason until the middle of this month.

I decided not to go to a kimono party.

I am supposed to take part in a kimono party on Saturday. It is a large event. Over 100 people, all wearing kimono, are going to attend a banquet in a hotel in Osaka. I had already prepared my kimono and I also paid the party fee.

However, upon hearing the announcement from the government, I decided not to go to the party. I feel sorry for the host of the party because of my cancelation. But I think I should take responsibility in helping the government to stop the spread of COVID-19. With such a large event, it is quite likely to run into someone infected with COVID-19 in the party.

Nobody has the right answer under the pandemic.

Under the pandemic, all over the world, we are losing our freedom. Some cities have forced lock-down the second time this year. There are protests between the government and the citizens about the lock-down policy.
Everybody has his or her own ideas and I try my best to understand different views. Someone doesn’t wear mask and someone travels and someone goes to parties. Nobody has the right answer.

Let’s focus on what we can do moving forward!

Now, under the pandemic, our personal choices and actions towards the virus are revealed to the public.
How would you look at the people who are making choices different from you?
I’m afraid that the society would be further divided, and this gap would get deeper to a point that may not be repairable in the future.

We should stick together, find our common ground and create a well-balanced solution for everyone in the society.
Let’s focus on what we can do moving forward!